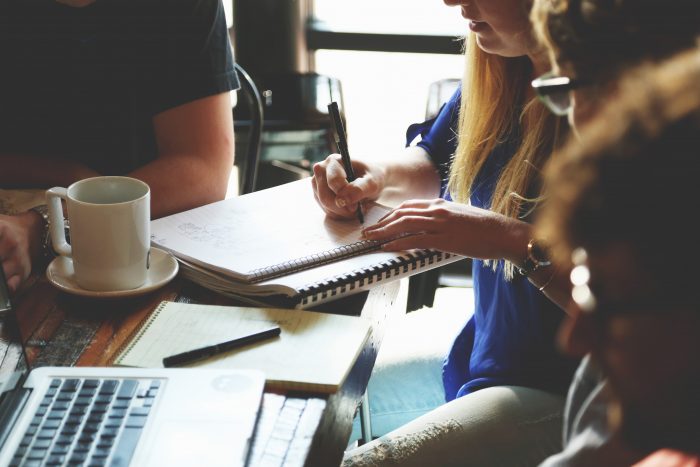 Research and innovation centre, based in Turin – Italy 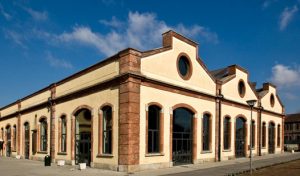 LINKS is a non-for-profit private research foundation, created in Torino (Italy) in 2017 by Compagnia di San Paolo, a major European bank foundation, and Politecnico di Torino, one of the major Italian engineering and architecture universities. It is fully operative since the 1st of January 2019, thanks to the merger and acquisition of Istituto Superiore Mario Boella (ISMB) and SITI.
LINKS is the coordinator of the GOEASY project, and led the work related to the design and development of a scalable and trusted LBS infrastructure within the context of GOEASY. LINKS, thanks to the activities of former ISMB, brings its expertise and skills obtained from participating in several funded European projects as partner and coordinator within the H2020 framework. More specifically, ISMB has worked extensively in the design and development of IoT platforms, to enable secure, scalable and reliable exchange of data in geographically distributed environments defined by these projects. Furthermore, ISMB has participated in research activities providing advanced services in large scale scenarios (ALMANAC). Finally, in the past years ISMB worked on different topics that are relevant for GOEASY, being related to ITS applications showing the EGNSS added value, with a particular attention to authentication-related matters. These activities included the analysis and design of spoofing countermeasures based on either receiver-embedded algorithms and signal authentication mechanisms. 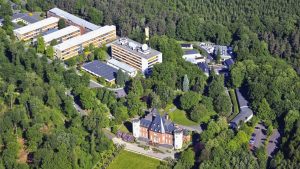 The Fraunhofer Gesellschaft zur Förderung der angewandten Forschung e.V. (FhG) is the leading organisation of institutes of applied research and development in Europe. Future-oriented strategic research is carried out with the aim of promoting innovations in key technologies with an economic and social relevance in the next five to ten years. The FhG is an autonomous organisation with a decentralised organisational structure of 72 institutes, of which 15 institutes are dedicated to research in information and communication technology.

The Fraunhofer Institute for Applied Information Technology (FIT) has around 30 years of experience in the humane design of intelligent system solutions that integrate seamlessly into business processes. Our approximately 160 scientists work in interdisciplinary teams and combine knowledge from information technology with questions from other areas of life. This results in tailor-made solutions that support people in their work and enrich them in their free time. Our strength is the holistic system development – from the validation of concepts or prototypes to the design and implementation of innovative customer solutions.

FIT participates in GOEASY with an experienced and excellent team of researchers from the User-Centered Computing (UCC) department. FIT UCC is an interdisciplinary group of scientists that has gained an internationally acknowledged reputation in the areas of Internet of Things, User-Centered Design (UCD) and Smart Data. A user centered design approach helps to analyze the area of Location-Based Services and the involvement of citizens as end users in the developed solutions. From this analysis, challenges and potential for improvement are iteratively indicated and evaluated using an iterative, agile development approach that continuously involves end-users from the desired application scenarios. In addition, FIT assumed the role of technical director and contributed to the development of Galileo services.

ICT company developing innovative products and services for a wide range of business and consumer applications, based in Stockholm – Sweden 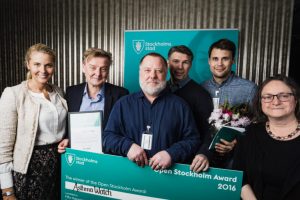 CNet Svenska AB is a leading-edge software house specialising in research and innovation for Internet of Things, Services and People. We are a R&D intensive software house and very experienced with collaborative international R&D projects and how to create innovative and exploitable outcome and long-term value from research and innovation projects.

The results of our innovation projects are exploited through spin-off companies, who market products and services based on our Internet of Things technologies. EnergyInBalance is a service for home owners to monitor and manage their household’s energy consumption using our Internet of Things technology. LinkWatch is a platform for self-management of chronic diseases like diabetes, asthma, stroke and cardiovascular diseases based on a medical device gateway developed by CNet. WebHybris is a tool for monitoring and maintenance of critical infrastructures like bridges. We are also one of the main developers behind the Open Source middleware LinkSmart, a development platform for creating applications for the Internet of Things.

CNet is a spin-off company from Swedish IT research and was originally founded by a research group from SISU, Swedish Institute for Systems Development. CNet’s technical expertise is highly acknowledged and we have served as been the technical coordinator in several large pan-European R&D projects – Hydra, ME3Gas, REACTION and ebbits and the project coordinator of IoTBridge.

We have also been the Innovation Manager in several projects like Almanac and we have developed our own method for Innovation Management which is being used in several FP7 and Horizon2020 projects. Currently we are the technical coordinator of the two H2020 projects COMPOSITION and PICASO. CNet is a member of AIOTI -The Alliance for IoT Innovation, the Continua Alliance for connected personal health, ANT+ for fitness developers, ARTEMIS-IA for embedded systems developers and SM2ME – Swedish M2M Enablers.

One of the core commercial solutions of CNET is the LinkWatch product, www.linkwatch.se. It allows users to manage home measurements of various health parameters (eg, blood pressure, weight, pulse, glucose, oxygen saturation) at times when it suits them. Measurements are automatically transferred to central systems or services. LinkWatch was used as one of the enabling technologies for the AsthmaWatch use case.

Hardware, software and design. Present all over the world, headquarters are in Madrid – Spain

BQ was one of the leading European technology companies. Their goal was to help people to understand technology, encourage them to use it and inspire them to create it. They were committed to education in technology, DIY philosophy and the Open Source Initiatives. BQ applied this philosophy to its products (smartphones, 3D printers, robotics and much more) and software solutions, by working to make technology a tool for improving the world and the lives of its users. As a smartphone manufacturer, BQ managed the full design of their devices, from the scratch to the mass production, including hardware, mechanicals, software, testing and manufacturing processes. In 2016, BQ was the first company to launch to the market a Galileo-enabled smartphone, the Aquaris X5 Plus.

The role of BQ in this project was to, as a smartphone manufacturer, bring their expertise in SW integration, to facilitate the development of the local trust features and to provide the hardware to be used during the pilots. BQ also brought their knowledge in terms of testing and coordinated the quality tasks of the project. 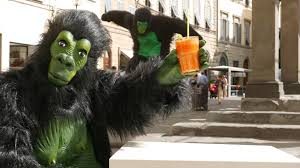 greenApes is a certified Benefit Corporation, founded in November 2012 with the aim of promoting sustainable lifestyles with innovative digital apps.

In October 2012, it was granted a contribution from FILAS (Lazio region) as research spin-off.

In March 2013, it released the first version of the Citizen Engagement Platform (CEP), initially released as a mobile iOS application: greenApes – a digital place to share green ideas and actions. Since then greenApes also released native Android and web-responsive apps of its  platform. All apps are free for end-users.

In 2014 greenApes started developing a Corporate platform, for businesses interested in the engagement of their employees in CSR projects (Employee Engagement Platform, EEP). Thanks to its innovative approach the company won the 2014 Italian Sustainable Development Award, being awarded with the President of the Republic medal.

In the following 3 years greenApes grew further, via commercial deployments and participating in four European projects, while obtaining the certification of Benefit Corporation. The two platforms (CEP and EEP) were finally consolidated into a comprehensive Stakeholder Engagement Platform (SEP). As of January 2017, greenApes counted 20,000+ users who in two pilot Users Communities, Florence (Italy) and Essen (Germany), the 2017 European Green Capital. After these pilot experiences the platform was deployed in Milan, Munich and, in connection with the GOEASY project, in Turin.

greenApes has been featured in dozens of online articles and blog reviews in Italy and Germany, as well as in some of the largest Italian and French newspapers (i.e. Lastampa.it, Republica.it, Wired.it, Ouest France), while being hosted in radios and tv channels. ARTE, the most important European cultural channel featured a 20-minute report on the greenApes concept in their program dedicated to sustainability.

greenApes is now the digital platform rewarding sustainable actions and ideas: a jungle populated with inspiring stories, a great community that can access real life rewards for their positive impact. The platform can be easily customised for  smart cities, as well as for employee and customer engagement projects.

greenApes certifies real actions also integrating with third party apps and services related to sustainable living. During the GOEASY project greenApes developed brand new functionalities to detect green mobility choices of citizens in a privacy and friendly way, while rewarding them by leveraging on its existing engagement platform.

Turin is the capital city of the region of Piedmont, northern Italy. 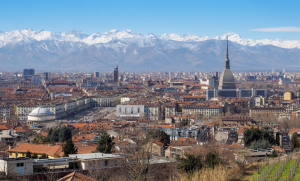 The City of Torino, with its 908.000 inhabitants, its 130 square kilometres of territorial extension and its GDP of 55.000 millions of Euros (which is 4.5% of the national GDP), is one of the most important city in Italy. Since the 1990’s, Torino has been following a path that has transformed it from an industrial capital – a sector which continues to play a fundamental role – into a pole of innovation, culture and improved quality of life. Torino first started a process of territorial transformation, thanks to the 1995 Town Master Plan, then a process of territorial marketing, through the first and second metropolitan strategic plans in 2000 and 2006, and it is nowadays multiplying its efforts towards a more and more sustainable development. The urban sustainable development is, indeed, one of the key-themes of the City Strategic Guidelines: in this document the Municipality government describes its strategic action-lines for the City development and, among the others, it affirms its commitment to foster the environmental quality of the town territory, to increase the capability of technological innovation and to make Torino a real “Smart City”. Torino path to become “Smart City” started 2 years ago, when the City Council took the decision to take part in the initiative of the European Commission “Covenant of Mayors” and – as one of the first Italian cities – engaged itself to elaborate an Action Plan for Energy in order to reduce its CO2 emissions more than 20% by 2020. It is structured on 51 actions, concerning several sectors such as: transportation (public and private); building trade; tertiary sector (municipal estate, public and private tertiary, residential building, public lighting); industry.

The City of Torino brought to GOEASY its experience in supporting activities of citizen engagement, recruitment and support. The City ensured the interaction with local authorities, public bodies and citizen fostering the communication to the citizens, supporting administration process regarding the implementation of GOEASY demonstration actions.

This project has received funding from the European Union’s Horizon 2020 research and innovation programme under grant agreement No 776261.

Are you a relevant stakeholder who’d like to be involved? Get in touch!

Register to our newsletter HERE

Visit us on LinkedIn